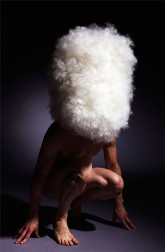 Performance art can be an image-centric form of expression. In many ways this triptych is a comment on vanity and ego – or at least a response to, or acknowledgement of, my own narcissistic tendencies. We are (I am) consumed at times by how we are (I am) viewed by others. When you and your body are the subject and material, it becomes difficult to extract vanity from the equation.

My aim was to make portraits that reflect my psychological disposition – my fractured identity and my efforts to achieve cohesive and consistent emotional wellbeing. I am attempting to show my struggle to unite the opposing voices in my head that urge me on toward one objective or another; a visual manifestation of my feelings of brokenness and fragmentation. These concepts were my inspiration.

The objects stand alone on my nude body. To take on the weight of being symbolic they needed to be unhindered and unadulterated. My initial concept dealt with opposing masculine and feminine imagery (dichotomy my main objective) by placing feminine objects (wigs, breasts, high-heels) on my masculine nude form. But I opted for more conceptual and visually luscious metaphorical objects.

When putting together the triptych I was thinking about dichotomy, especially in regard to Apollonian and Dionysian ideas. Nietzsche claimed in ‘The Birth of Tragedy’, that the hero of a classic Greek Tragedy struggles to make order (Apollonian) of his unjust and chaotic (Dionysian) Fate. Nietzsche’s idea has been interpreted as an expression of fragmented consciousness or existential instability. Inside each of us, he said, Apollo and Dionysus wage a war, with the two sides vying with one another for dominance. Camille Paglia writes about the Apollonian and Dionysian in her book Sexual Personae. For her, the Dionysian is dark and is reminiscent of spirits from the underworld (the red turban), while the Apollonian is light and structured (the white wig).