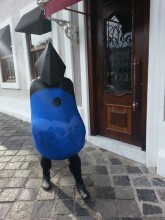 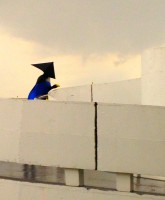 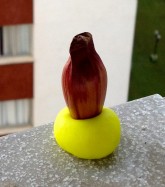 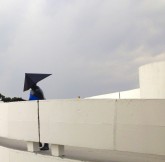 STRANGE BIRD for the BIENAL INTERNACIONAL DE CURITIB (BRAZIL). I began by walking through the city of CURITIBA to the OSCAR NIEMEYER MUSEUM. I then interacted with the architecture, placing small yellow balls of clay on the railing of the spiral ramp. in each ball of clay stood a single pinhão (brazilian pine nut).

I must give the warmest THANKS and PRAISE to LISA SIMPSON (AGENT COSTURA) for her assistance with constructing the costume I will use in the performance, STRANGE BIRD. she is an artist and a clothing designer with a shop, GARAGE, in CURITIBA. she makes performances with an amplified sewing machine as a musical instrument. I really could not have made this costume without her. her advice and skills were invaluable and her friendship is priceless. next week she moves to Berlin and she’s been assisting with installing work for the BIENNIAL, and yet she carved out time to help me. gratitude doesn’t begin to describe my feelings.

my performance, STRANGE BIRD, has two phases. I first begin by walking through the city to the OSCAR NIEMEYER MUSEUM. the distance is 2.5 kilometers (1.6 miles). my ROUTE will begin at the LARGO DA ORDEM, the HISTORIC CENTER of CURITIBA – the oldest part of the city. i’m very interested in going from the old (LARGO DA ORDEM) to the new (MUSEUM of the EYE), as if I am traveling through time from the past to the present.