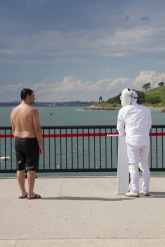 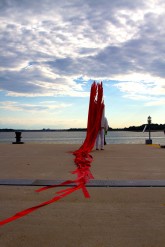 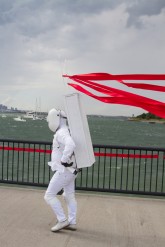 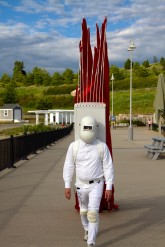 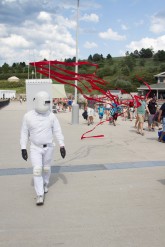 Time Body Space Object (TBSO4) curators, Alice Vogler and Vela Phelan, invited me to participate in the fourth edition of this project that re-contextualizes their original conceptual premise. Artists in the first three editions were each assigned one hour and told they must enter and leave the space empty. This summer, these curators are now setting a similar structure on a larger project involving site-specific durational performances on Spectacle Island, Boston, Massachusetts, USA. Visit the TBSO4 website for the 2015 artist roster and click on the names to see images of their work. I highly recommend scrolling down to the bottom of the main page for links to past Time Body Space Object editions. The artists are exceptional and the work is always expertly documented and completely riveting. TBSO4 is part of the Isles Arts Initiative.

This year artists must take the first ferry out to the island in the morning and return on the last one that night – a period of 8 hours – leaving nothing behind. Artists approached this in many ways, but I planned an eight-hour labor-intensive site-specific work that held as a benchmark ideas of transformation and visual spectacle.

The following posts are thoughts and images that resulted from this generous invitation from Vela and Alice to participate in, what I believe to be, a really monumental project.

Special thanks to Nabeela Vega and Vela Phelan for documenting this work and Mark Dal Pra for helping to construct the wearable structure.

Here are my inspirations and impulses behind REDLINE. They are vast and, in a way, random and hard to pin down…exactly. The work is a durational mash-up designed for a specific structure (the fence) and informed by the history of Spectacle Island and my current interest in risk, danger, safety zones, and protective barriers. To put it very basically, whenever it came time for me to make artistic, practical, or aesthetic decisions regarding this work, I simply relied on information directly connected to the island. I challenged myself to be receptive to all forms of stimuli and create a strong visual impact. The performance is heavily processed and abstracted.

I began doing research on Spectacle Island and was drawn, immediately, to specific moments in the island’s history: a place of quarantine and, eventually, a dump – capped and contained by the contents of the Big Dig. Extremely sun-sensitive, I struggled with how to protect myself for eight hours with no shade. I chose to amplify this impulse and create a costume that would not only protect me from the summer sun but reference quarantine and waste –  contamination, in general. I wanted to stand out, to make myself distinct, to be (very obviously) other – protected and insulated. I took on the role of a worker going about my abstract task, but I also saw myself as an explorer, an astronaut, or an ambassador.

I received the island photos from Alice and Vela and was gravitationally drawn to images of the fence. I wanted to respond to a built environment – one unabashedly created by humans – as was the island. I started thinking about this agent of safety and protection (the fence) and my recent fascination with the red portion on a speedometer, thermometer, or any type of gauge – the REDLINE. I’m curious about that place that is neither safe nor unsafe yet exists to protect, or warn you, that danger and risk are at hand.

I asked Alice to measure the fence – I believe Marilyn Arsem helped her. Avoiding the area near the exit/entrance to the ferry, I otherwise covered the entire black fence in three portions, north side of dock, south side of dock, and the length along the beach facing west. A total of about 500 yards of ribbon was rolled into 32 small spools.

It took about five hours to weave the ribbon through the entire fence. Each spool of ribbon was tightly wound around a black stick and fastened with a black safety pin. I would begin by pinning the ribbon to the fence then weaving it through the rungs, often on my knees. I would secure the end by wedging the black stick between the rungs of the fence so it would not come undone. Each piece of ribbon was exactly the length of Defibrillator Gallery – on outlet for my curatorial practice that does, often, embrace risk.

After all the ribbon was woven through the fence, I began undoing what took a long time to do. My process of undoing began by removing the safety pin at the “start” of each length of ribbon. I would fasten the black pin to my white pants.  At the other “end”, I would pull the black stick and the ribbon would slither out of the rungs of the fence. Tension and resistance from the fence would allow me to pull the ribbon in long straight lines, bisecting thoroughfares and gently and gracefully disrupting pedestrian traffic flow. Once released, the long red ribbon would dance in the wind.

Coincidentally, I began this process of undoing when a large number of people were on the pier with me, waiting to take the ferry back to the mainland. Many of them had seen me working all day long and my undoing was sparking their curiosity. Many people spoke to me and I would converse, trying to be cordial, polite, and receptive as I went about my task. A floodgate opened. Left mostly undisturbed for the majority of the day, in the afternoon hours I was bombarded with people asking questions, frequently overhearing them report back to their groups the things I had said. I would often ask them what they thought I was doing (or they willingly divulged this information) and they said things like ‘’decorating’’, “activism” or  “Comic Con” (which happened to be in Boston that weekend). I always started by saying that this is “art” or “performance art” – it was important to me that they saw it through this lens and in this light.

My backpack was designed to hold not only the bundles of ribbon but also white fiberglass rods that, when assembled, transformed the backpack into a wearable sculpture. In performance, I would place the backpack four or five ribbon lengths away and walk back and forth, removing the ribbons one by one from the fence and attaching them to the sculpture. Keeping some distance between me and the backpack allowed me to pull or drag long strips of ribbon individually (almost ceremoniously) before attaching them to the sculpture. I wanted to create dramatic imagery, but with color and object and scale, not action or emotion – I walked and worked naturally, briskly, efficiently. I took the same route as when I wove the ribbon, ending at the farthest point from the ferry. This was orchestrated so that the crowd gathering on the pier would see the work from a distance. It was the last ferry so the island was vacant and everyone was on the pier or the boat.

Once all the ribbon was removed from the fence and attached to the sculpture, I put it on my back and slowly walked along the fence – my captive audience witnessing a slow procession.

When Alice and Vela sent me the invitation and told me the site was Spectacle Island, I fully intended, from the first moment, to make a spectacle – something visually scrumptious. When I took on this goal of making a large visual impact, I remembered an image in Priscilla Queen of the Desert when one of the characters, wearing a massive silver lame cape, was perched on the top of a bus as it sped down a barren desert highway – creating an enormous silver plume. I decided to mirror this in some way…and I did.

It was timed so that I would be the last one on the last ferry to the mainland. After a long procession along the fence, I remained as a tableau at the end of the pier…looking…waiting…conjuring images of Ariadne with her red string looking out to sea – waiting for Theseus to return. Eventually, I spun slowly to collect the ribbon around me and boarded the ferry for Boston.